By Kate Dennett For Mailonline

A Missouri school area district has been ordered to pay a transgender student $4million in a sex discrimination pay out after refusing to let him use the boys’ restrooms.

A jury in Jackson County ruled on Monday that the Blue Springs School District had discriminated against the student, known as RMA, who reportedly transitioned from female to male at age nine.

Despite changing his name in 2010 and his birth certificate in 2014, the boy was still not allowed to use the boys’ restroom and locker rooms at several schools, including Delta Woods Middle School and Blue Springs High School Freshman Campus, Fox News reported.

The jury has awarded the former student $175,000 in compensatory damages as well as $4million in punitive damages. The plaintiff has also requested the school district cover the attorney fees.

A transgender student was not allowed to use the boys’ restroom and locker rooms at several schools, including Delta Woods Middle School (pictured) and Blue Springs High School

Blue Springs School District told KSHB a statement that it disagreed with the verdict and would be ‘seeking appropriate relief from the trial court and court of appeals if necessary’.

The lawsuit was filed in 2015, after the plaintiff filed a charge of discrimination with the Missouri Commission on Human Rights in 2014.

The lawsuit against Blue Springs School District was initially dismissed by a Jackson County circuit judge but in 2019, the Missouri Supreme Court ruled lawsuits claiming discrimination based on sex and sex stereotypes were legally allowed.

The lawsuit was then able to continue, with attorneys for the student claiming at the time that the case was the first of its kind that was taken up by the Missouri Supreme Court. 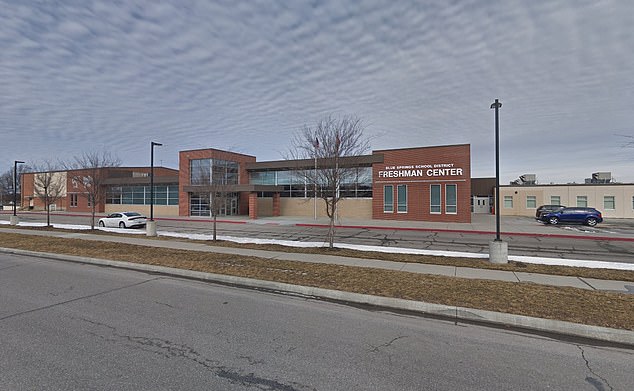 It is understood the student legally changed his name in 2010 and successfully petitioned Jackson County Circuit Court in 2014 to change his birth certificate to reflect his new gender and name.

But he was still denied access to the boys restrooms and locker rooms, even though he was ‘recognized as a boy under the laws of the state of Missouri’, according to court documents.

The student took part in boys PE and athletics in middle school and joined the eighth grade boys’ football and track teams, but he was forced to use a ‘separate, single person, unisex bathroom outside the boys’ locker room’.

According to court documents, the boy did not take part in fall sports activity during the 2014-2015 school year at the Freshman Center due to being denied access to the boys’ locker rooms and restrooms.