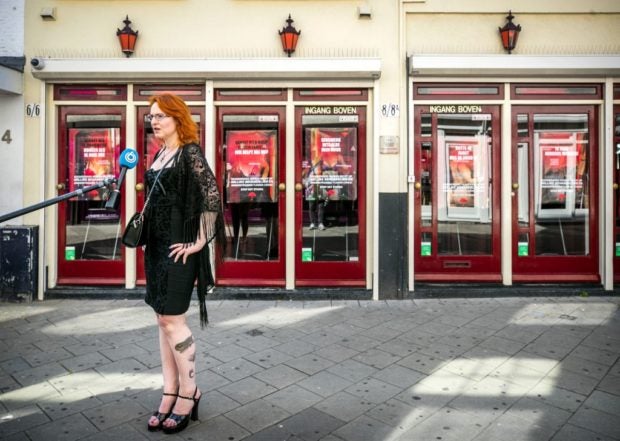 Sex worker Moira speaks to the press in Doubletstraat, the Hague, the Netherlands, on June 12, 2020. Photo by Remko DE WAAL / ANP / AFP

Dutch gyms, swimming pools and amusement parks will also be allowed to reopen on May 19, while cafes and restaurants with outdoor terraces that restarted last week will be permitted longer opening hours.

Rutte said there was “one condition” which was that intensive care and hospital admissions must have fallen further by May 17, otherwise the “pause button is pressed”.

“We don’t think it will come to that, but we have to take it into account,” Rutte told a press conference.

“We want nothing more than to give space to society, but we also do not want to make mistakes, just before the finish.”

The lifting of the ban on sex work will be a major boost to Amsterdam’s famed Red Light district, which has been effectively shuttered since October.

Sex workers are the last of the so-called “contact professions” including hairdressers that have been allowed to reopen in the Netherlands.

The Netherlands, with a population of 17 million, has administered six million vaccinations and the government said it “expects that the number of new hospital admissions will now continue to decline rapidly.”

Dutch health authorities have recorded 17,383 deaths from coronavirus and 1.57 million infections since the start of the pandemic. It reported 47,108 infections last week, down 10 percent on the previous week.

For more news about the novel coronavirus click here.


What you need to know about Coronavirus.


The Inquirer Foundation supports our healthcare frontliners and is still accepting cash donations to be deposited at Banco de Oro (BDO) current account #007960018860 or donate through PayMaya using this link .

Dutch study finds no evidence of monkeypox transmission before May 2022

10 Best Romance Movies Of All Time, According to IMDb

Can you be in love with more than one person?